Earlier this year I came across a site called CrazyGuyOnABike. It is a place where folks from all across the globe can journal their bike tours. Folks tour from coast to coast, border to border and everything in between sharing the story of their bicycle touring adventures. I have been all kinds of inspired from reading the journal entries of cyclists who ride all over the world. Did I mention it is inspiring? Oh, I did? Well, it really is inspiring. 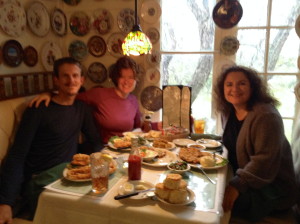 Dinner with Cyclists Matt and Pam who are traveling across the country from California to Florida.

Last week I happened upon a journal for Matt and Pam who are cycling from California to Florida along what is commonly known at the Southern Tier. I began corresponding with them in the hopes of being able to visit with them somewhere along the Central Texas portion of their ride. Luckily everything worked out for us to meet for an early dinner while they were taking a couple of rest days in Comfort, TX. Below is the quick audio interview and a picture from our delicious dinner at PO PO Restaurant.

Matt and Pam Bicycle Touring across the Southern Tier of the United States [ 11:32 ] Play Now | Play in Popup | Download

I really enjoyed spending time with Matt and Pam. I hope they didn’t mind all the interrogating…er..um…questions I had regarding the down and dirty aspects to bike touring that typically don’t make it to the journal entries of CrazyGuyOnABike. Thank you both for your candor, honesty and not balking when I asked the tough questions. I hope to begin my own CrazyGuyOnABike adventure in early April.

So, if Matt and Pam’s journey interests you, if you have ever been on a bike tour or are fired up and ready to join my West Texas Triangle Tour let me hear form you in the comments or via email.

On Saturday, October 26th I participated in my first ever triathlon. As much as I thought I had prepared for the 7 mile run/16.5mile bike/5.5mile kayak I was not. I wasn’t concerned with cycling since I had been doing that regularly for the last 2 1/2 years. I had participated in bike tours of up to 54 miles. Kayaking was something I had picked up recently, but felt pretty good about. What had me concerned was the running.

Now if you’ve been following my blog, then you may recall a post titled, “I’m A Runner”. And I was back about 8-10 years ago. In mid-September I started the run portion of my training in earnest. The more I did it, the better I felt about things. I have never been a fast runner, cyclists (insert given sport here), but I have always been someone who finishes. So, I knew the only way I wouldn’t complete the triathlon would be if I were injured. Thank goodness that did not happen.

To get my body accustomed to shift from running to cycling, I started stacking my workouts with a short run followed by a short cycle. I felt okay and thought I would be able to finish the run and bike portions of the triathlon within the 3 hour time limit.

The morning of the event, Michelle Geyer and myself discovered that there were some hardcore folks competing and that quite a few of the folks participating were doing so in teams. One person to run another to ride then a team kayak. When a fellow participant asked, “You are doing it all?” in a surprised disbelieving tone I knew I was in trouble. My response was, “It’s our first triathlon, we didn’t know any better.” That’s not to say there were not other “doing it all” folks there, but I get the feeling they were the ones who looked a whole lot more fit than this recreational cyclists/runner/kayaker.

It didn’t take long for me to find myself running solo. I was extra glad I had brought along my iPad Mini inside my backpack. I had been training using Todd Lange’s 10K101 podcast and needed the familiar beat, encouragement and rhythm to keep me going. Todd was there to tell me I was doing a good job, tell me when to run and when to walk and even had crowd sounds to cheer me on. Call me crazy but I was so thankful that I even told the recorded Todd, “Thanks!” when I heard words of encouragement. I knew I was the last of the runners, but I also knew I wasn’t going to give up.

It was an out and back course so it wasn’t too long before I started seeing runners on their way back. I decided to encourage them by cheering them on and giving them high fives. It was funny because encouraging them actually encouraged me. Naturally they were supportive in return.

When I finally made it to the run/bike transition the organizers and volunteers cheered me into the bike corral. Although I was encouraged to speak to the Race Director before proceeding. They told me that I had 1 hour and 10 minutes to complete the 16.5 mile bike portion before the 3 hour cut-off. I told them that I wasn’t in this event to win or compete. This was simply a challenge with myself to see it through and that if they would let me do that then I considered it a win. They understood my goal and wished me luck.

I headed and out and saw cyclist who were completing their second leg of the triathlon and knew I really needed to cycle as fast as I could. This was where I knew I could make up time. Cycling was my real strength in this event. My legs were worn from the run and I faced a headwind in the first few miles. When I got to my second turn was when I encountered the man who became my own personal cheerleader. He was on a motorcycle and helping to direct the cyclists. Being the last one meant that he was waiting on me. And wait on me he did. He told me how much time I had at each turn. Would come back to check on me and tell me I needed to, “Ride like hell” and “You’ve got this!” and “Pedal as fast as you can”. I didn’t have the heart to tell him I was going about as fast as I could on legs that felt like lead. He was also there when I was rounding the last turn to let me know that it was exactly the 3 hour mark and to, “Ride in with my head held high”.

As I neared the end of the bike ride, I heard cheers and looked up to see my family with signs encouraging me to “go faster” and telling me, “you can do it”. They made me feel like I had already won. When I pulled in to move to the kayak portion, I was met by a spitfire of a woman who told me, “Get changed and lets go. You’ve got a personal escort.” In my thrilled but bewildered state I complied and in no time at all I was kayaking. 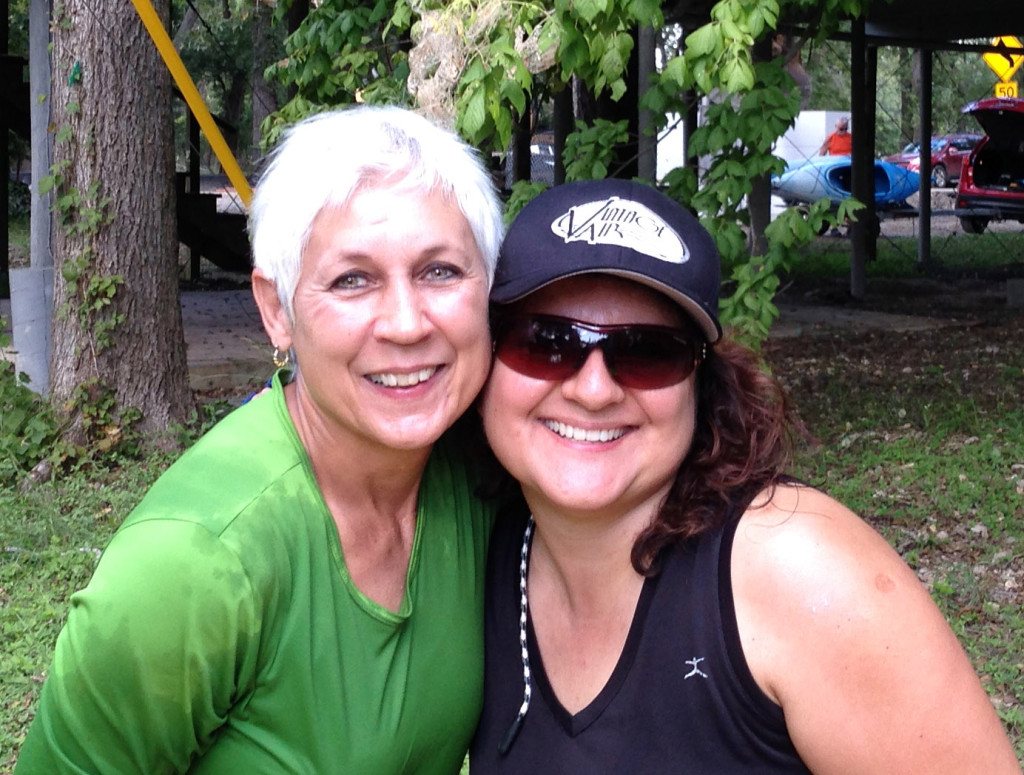 The spitfire’s name was Jeanette and over the course of the next 5.5 miles of kayaking she became my friend and inspiration. Her story of how she became an adventure racer is one that requires a post all it’s own. I hope to sit down with Jeannette soon for an interview so that you can hear it in her own words. I wish I could share more, but what I will tell you is that my life changed that day. The Martindale Triathlon and it’s wonderful, and in my mind heroic, volunteers are worth their weight in gold.

I finished the entire event but if you look me up you’ll see that I am labeled “disqualified”. By finishing the run and bike portion in 3 hours and 13 minutes I went beyond the official time limit by 13 minutes. When I climbed out of that kayak on even more wobbly legs my family was there once again to cheer my success. And that’s exactly what it was, a success. I set out to see if I could complete a triathlon and by God I did.